Questions and Answers with Quintin Barry 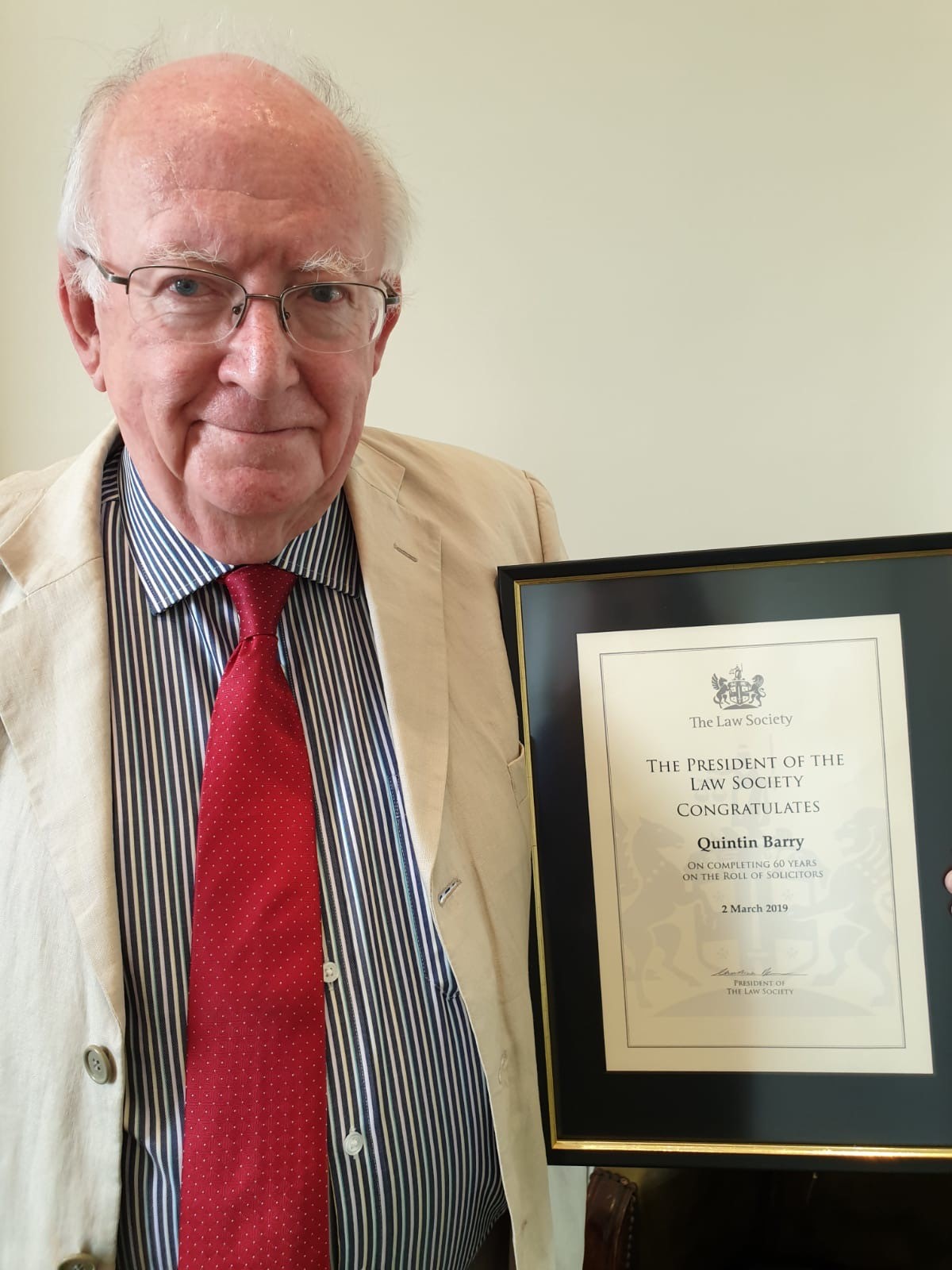 Your photograph shows you holding a certificate to honour your qualification as a solicitor  for sixty years. What does this mean to you?

Not much at all, I am sorry to say.

Have you got any words of wisdom for those of us who areless experienced in life?

It’s always wise to choose your battles and avoid conflict where possible.

Your career is very varied, you have worn many hats but mainly you have been a partner at DMH for many years. When you retired from there we were very privileged for you to come and work here as a mentor in our employment department and assist with employment cases for our clients. What is it like to work for LLB?

I find it to be a very happy firm.

You have been a solicitor for 61 years, what decided you to be a solicitor?

My father encouraged me strongly to become a solicitor.

Are you glad that you obeyed your father?

Left to myself, I probably would have become what Hilaire Belloc called, “a remote and ineffectual Don”. An academic career certainly would have appealed to me.

What has been the best day of your legal career so far?

In my legal career, I enjoyed winning cases; it would be difficult to pick out one day of winning a particular case.

What has been the worst day of your career?

Having to fire someone for misconduct whom I hitherto had respected.

What has been your favourite part of the job?

I enjoyed advocacy and being in Court generally.

What are your hobbies?

The study of history.

You have published several books, what number book have you reached now?

My fifteenth book has just been published, the next will be early next year and the seventeenth is completed.

Is it light reading?

Only if you enjoy the study of the Franco-Prussian War, (There is also one on Lord Derby and his racehorses).

On a lighter note, what is your favourite song?

Anything sung by Doris Day.

Are we to assume that Doris Day is your favourite actress?

Yes, but I was also in love with Ingrid Bergman.

You have refused the offer of a new briefcase from Lawson Lewis Blakers as a present and the one you have in the second photograph appears very well used, please tell us the story behind your fondness for this well used briefcase?

In 1979 while I was the Labour Candidate for Brighton, Kemptown, the local dustmen came out on strike. They picketed the tip in Sheepcote Valley. Ultimately, the Police arrested all of the pickets whom I had regularly visited to support them (about 40). The first four came up before a particularly right-wing magistrate, and they were each fined £200.00 which meant that when the rest came up for trial, the union branch’s funds would be wiped out. I appeared for them when all 36 came up before a different bench. That night, the Argus shrieked incredulously in its main headline, “No fines for the pickets”.

A few days later, as a reward for this, a group of dustmen gave me this briefcase, and it has been with me ever since.

What other positions have you held?

I served as an Employment Judge for about 15 years before retiring in 2008. Sitting first at Stratford East, and later at Ashford Kent. I had never intended to accept a judicial post, but it was a natural progression from having been an advocate in employment tribunals. I enjoyed sitting more than I had expected.

What other positions do you currently hold?

I am a deputy lieutenant for the county of East Sussex.

What does that involve?

If the Armada shows any sign of entering the Channel, I must light the beacons; and if Napoleon shows any disposition to invade, I must callout the militia.

You have achieved so much in your career so far, but have you done any thing else?

After I retired from politics, I became chairman of a group that was applying for the franchise for commercial radio; rather to our surprise we won the competition and founded Southern Radio (It was later taken over by Capital Radio). It fell to me as the chairman to press the button for the first track played on Southern Radio, which was “A Bridge over Troubled Water”.

For about 20 years I was chief executive of Law European international group of law firms.

I was Chairman of South Downs Health, an NHS Trust.

You hold the position of Notary Public, what does that involve and what geographical area do you cover?

A notary public’s chief function is the authentication of signatures on documents going abroad.

I see clients in Eastbourne and Shoreham, but they come from a wide area. I get to meet a lot of interesting people by being a notary public.

What would you advise a young person wanting to have a career in law?

It is often useful to get a degree in a subject other than law before taking up the law, which provides a wider experience.